The vaccine against MPX ("monkeypox") is effective against real smallpox. It is in short supply and should initially be used primarily after contact with the pathogen and as a preventive measure for people who are particularly at risk, in order to prevent illnesses and severe courses. We have summarised the most important information here. [Last update: 15.09.2022]

The most important facts about monkeypox vaccination

Is there a vaccine against MPX (monkeypox)?

The smallpox vaccine Imvanex (Jynneos in the USA) is licensed in Europe for people aged 18 and over. According to the STIKO recommendation, it can also be used to protect against MPX ("monkeypox").

Is the vaccination safe?

Yes. The vaccine contains an attenuated form of a virus that does not cause disease in humans and cannot replicate in human cells. The tolerability of the vaccine was tested on over 2000 people from different age groups, of different sexes and with and without HIV before European approval. The vaccine can be considered safe.
What are the side effects of the MPX vaccine?

Very common side effects (in more than 10 percent of those vaccinated) are headache, nausea, muscle pain and reactions at the injection site. However, the reactions usually disappear after a few days.

When does the vaccine start working?

Already about two weeks after the first vaccination dose, the risk of contracting the disease is significantly reduced. For basic immunisation, a second vaccination dose should then be given at intervals of at least four weeks and no more than two years, unless one has already been vaccinated against true smallpox in the past - in which case one vaccination dose is usually sufficient as a booster. In view of the vaccine shortage, the STIKO advises using all available monkeypox vaccines for the first dose first and administering the second dose when sufficient vaccine is available.

Important: Vaccination significantly reduces the risk of infection and a severe course, but does not provide 100 per cent protection. Other measures to reduce the risk are therefore also important.

How great is the protective effect of the vaccination against MPX/"monkeypox"?

There is still no reliable data on this for the current outbreak. According to the vaccination information sheet, studies have shown that basic immunisation with traditional smallpox vaccine has at least 85 per cent efficacy against monkeypox. And according to the STIKO, studies with animals have shown that Imvanex produces a similar immune response and protective effect as traditional smallpox vaccines. So this means that for the time being, Imvanex is expected to be 85 per cent protective against monkeypox (after two doses).

In view of the vaccine shortage, however, STIKO advises using all available monkeypox vaccines for the first dose and administering the second dose when sufficient vaccine is available. According to the STIKO, the first dose already provides basic protection against monkeypox, the second vaccine dose mainly serves to extend the duration of the vaccination protection.

Basically, vaccination significantly reduces the risk of infection and a severe course, but does not offer 100 per cent protection. Other measures to reduce the risk are therefore also important.

What documents and information do I need for vaccination against MPX ("monkeypox")?

The RKI has published an information sheet and the medical history and consent form for the MPX vaccination (also in Arabic, English, French, Portuguese, Russian, Spanish and Turkish). The documents contain all the important information and tips. You can find them here. Also: Don't forget your vaccination certificate.
Am I protected if I have already been vaccinated against real smallpox (variola)?

Vaccination against smallpox was compulsory in the FRG until 1976 and in the GDR until 1982. Many people born up to this time have this typical smallpox vaccination scar on their upper arm.

According to the RKI, the vaccination against real smallpox (variola), which was compulsory in the FRG until 1976 and in the GDR until 1982, also offers protection against MPX ("monkeypox"). Nevertheless, a subsequent vaccination after contact with the pathogen (post-exposure prophylaxis) or a preventive vaccination for people at particular risk is also recommended for people who have already been vaccinated against smallpox in the past. For them, however, one vaccine dose is usually sufficient instead of two.

Who is recommended to be vaccinated against MPX ("monkeypox")? 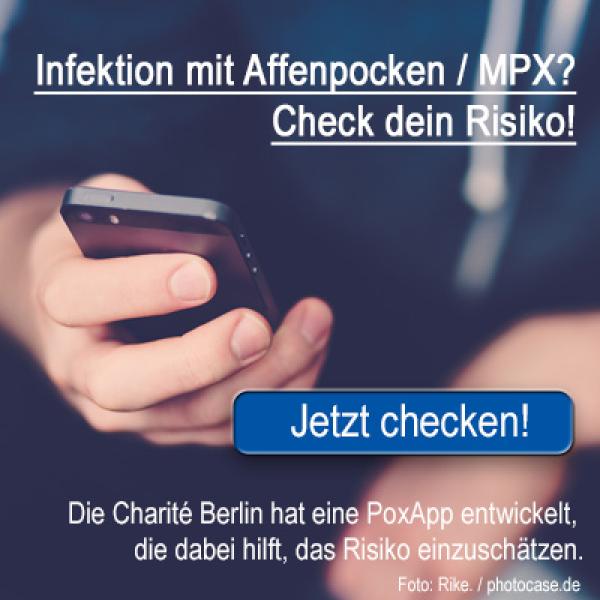 Monkeypox App:
Link to the monkeypox app of the Charité

The STIKO distinguishes between two different occasions for vaccination:

A "post-exposure vaccination" is recommended above all

MPX cases in Germany have so far mainly been found in men who have sex with men (MSM). MSM with frequently changing partners have an increased risk and should therefore be especially protected by vaccination, and further spread should be prevented.

However, the vaccine is scarce at the beginning, so priority is to be given to subsequent vaccinations and vaccinations for people at particular risk.

Vaccination is also recommended for laboratory personnel who have contact with infectious samples and are considered at risk of infection.

Should I get vaccinated even if I have already had MPX ("monkeypox")?

No. According to current knowledge, the immune protection built up by the disease is sufficient to protect against further infection for several years.
Is the vaccination against MPX free of charge for me?

Yes, the vaccination against monkeypox is paid for by the state.

Where can I get vaccinated against "monkeypox"?

Vaccination against MPX is regulated differently in the individual federal states. We have compiled the publicly available information and will update it continuously. Vaccination by federal states

As the vaccine is in short supply at the beginning, the following people will be vaccinated first as a matter of priority:

Priority within these groups, in turn, is given to people at increased risk of a severe course (for example, because of immunodeficiency due to cancer therapy or people with HIV who have fewer than 200 helper cells per microlitre).

According to the information available to us, it is often difficult to get an appointment due to the shortage of vaccines. Patients who are already connected to practices and outpatient clinics via HIV/PrEP care are usually vaccinated.

All others willing to be vaccinated can and should be put on waiting lists.

I cannot get a vaccination appointment because there is not enough vaccine available. When will this change?

Germany is supposed to receive more vaccine in the third quarter of 2022 - exactly when is currently unknown.

How does the subsequent vaccination against MPX ("monkeypox") work?

The first vaccine dose for post-exposure prophylaxis (vaccination after contact with the pathogen) should be given as early as possible within two weeks.

According to the American health authority CDC, a first vaccination within four days after contact (exposure) can prevent an illness. If the first dose is given on days 5 to 14 after exposure, the vaccination can prevent a severe course.

From four weeks to about two years after the first vaccination, the basic immunisation should be completed with a second dose. In view of the vaccine shortage, the STIKO advises using all available monkeypox vaccines for the first dose first and administering the second dose when sufficient vaccine is available.

Those who have already been vaccinated against "real smallpox" and do not have an immune deficiency usually only need one vaccine dose.

On the other hand, those vaccinated against smallpox with immunodeficiency should also get a second dose.

The vaccination is usually injected into the upper arm under the skin.

Protective vaccination also usually requires two doses of vaccine with at least four weeks between them. In view of the vaccine shortage, the STIKO advises using all available monkeypox vaccines for the first dose first and administering the second dose when sufficient vaccine is available.

Those who have already been vaccinated against "real smallpox" and do not have an immune deficiency usually only need one vaccine dose as a booster vaccination.

On the other hand, people who have been vaccinated against smallpox and are immunodeficient should also receive a second dose. This also applies to people with HIV.

Can people with HIV also be vaccinated?

People with HIV can also get vaccinated as long as their helper count is at least 100. However, it has been observed that people with weaker or weakened immune systems (100 to 750 helper cells per microlitre of blood plasma) may have a lower vaccination effect.

Do I get the vaccination even if I don't have a German residence permit or German health insurance?

Since the vaccinations are paid for by the state, you can also get vaccinated without a valid residence permit or German health insurance. However, the vaccine is very scarce and there are long waiting lists of people who are already patients in the HIV/PrEP vaccination practices.

Can I get vaccinated in another city or state?

You can try, but the vaccine has been distributed in such a way that it reaches those at highest risk. An overview by federal state can be found here.

Should everyone get vaccinated against monkeypox (MPX) now?

At present, the RKI assumes that there is hardly any risk of contracting the monkeypox virus (MPXV) for the majority of the population. Vaccination is therefore only recommended for people at increased risk.

What does intradermal vaccination mean?

Usually, the vaccine against 'monkeypox' is injected under the skin (subcutaneous vaccination).
Intradermal vaccination (intradermal = into the skin) is also possible.

With intradermal vaccination, less vaccine is needed because there are many immune cells in the skin that react to the vaccine. In this way, up to five vaccine doses could be obtained from one vaccine ampoule instead of just one. The vaccine protection is comparable, as a study shows. The vaccination against smallpox, which has been considered eradicated since 1980, was also given intradermally.

Since the 'monkeypox' vaccine is still in short supply, this would make it possible to offer vaccination to more people who are at risk of infection.
Intradermal vaccination is used in many countries, including the USA, Austria, Belgium, the Netherlands, Spain, Sweden and the UK.
The EU Medicines Agency (EMA) approved it in August 2022.

You can find more information on an ongoing basis here on the website of the Deutsche Aidshilfe.